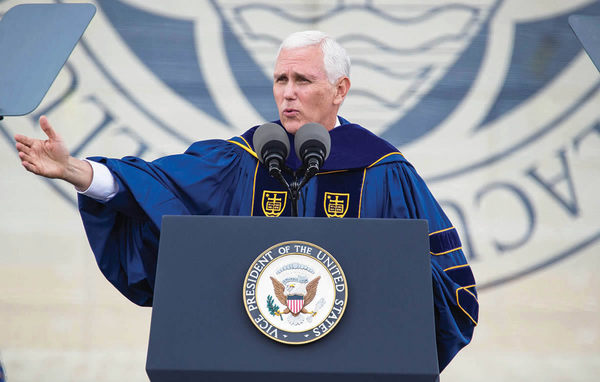 The Commencement of the Notre Dame Class of 2017

For a second consecutive year, Notre Dame played host at the University Commencement Ceremony to the nation’s sitting vice president. Former Vice President Joe Biden was co-recipient, with former Speaker of the House John Boehner, of the Laetare Medal in 2016. Current Vice President Mike Pence was the principal speaker and received an honorary doctor of laws degree in 2017. Rev. Gregory Boyle, S.J., founder of Los Angeles-based Homeboy Industries, the largest gang intervention, rehabilitation, and re-entry program in the world, received the Laetare Medal.

On June 5, 1960, President Dwight Eisenhower delivered the University’s first presidential Commencement speech. In his 20-minute address, Eisenhower foreshadowed a U.S. government on the verge of social and political change and one facing the difficult task of striking the right balance. Since Eisenhower, five more U.S. presidents have delivered Commencement speeches at Notre Dame—Carter, Reagan, Bush, Bush, and Obama. 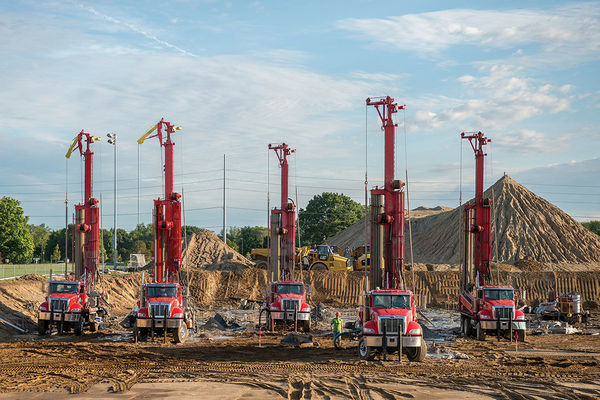 As part of the University’s continuing response to Pope Francis’ environmental encyclical, Laudato si’, it announced a comprehensive sustainability strategy that is at once “ambitious and yet realistic.” The plan focuses on six areas: energy and emissions; water; building and construction; waste; procurement, licensing, and sourcing; and education, research, and community outreach. A standing committee of faculty, staff, and students has been appointed to review progress on goals and consider continuing steps. Small working groups also are in place to identify benchmarks, tasks, and goals within each of the six areas of focus.

In its early years, Notre Dame was largely self-sustaining. As a result, some of the first structures on campus were farm buildings and a bakery, which provided sustenance to the student and faculty population. The farms relocated several times and were in service (lastly at an off-campus location) until 1995. 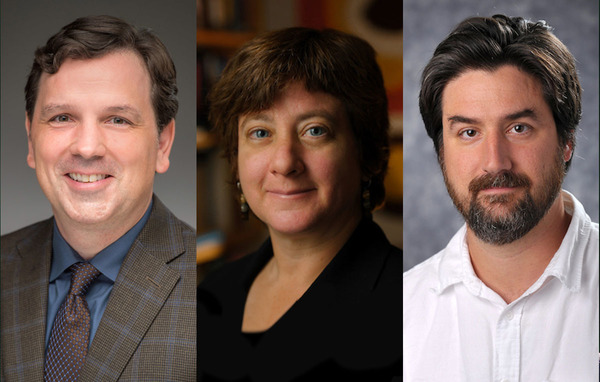 Notre Dame’s remarkable record of success in the receipt of fellowships from the National Endowment for the Humanities continues. Three faculty members—Associate Professors Darren Dochuk, Karen Graubart, and Sean Kelsey— received fellowships in 2017, bringing to 61 the number of NEH fellows from Notre Dame since 1999—more than any other private university in the country.

Notre Dame has a proud history of education in the humanities. The College of Arts and Letters was founded in 1842, the same year as the University. Today it includes 500 faculty, 3,000 undergraduates, and 1,100 graduate students. 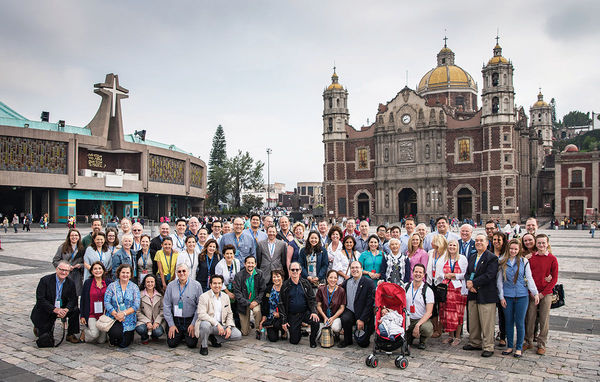 In a visit to Mexico City in July 2016, Rev. John I. Jenkins, C.S.C., announced the opening of a Notre Dame office there as the first step in a planned expansion of ties between the University and Mexico. The plan is part of a Notre Dame initiative to enhance partnerships with nations in Central and South America.

Near the turn of the century, Notre Dame’s enrollment grew rapidly thanks to recruitment efforts in Mexico and Latin America. The high percentage of Catholics in Latin America provided a natural connection for Notre Dame. Historians indicate that by 1905, over 10 percent of the student population came from south of the border. Recruiting materials such as pamphlets, advertisements, and catalogs were translated into Spanish and circulated widely. So significant was the University’s relationship to this part of the world that it purchased a train car to make trips to and from South Bend. Faculty including Rev. John A. Zahm, C.S.C., chaperoned trips between campus and Mexico City. 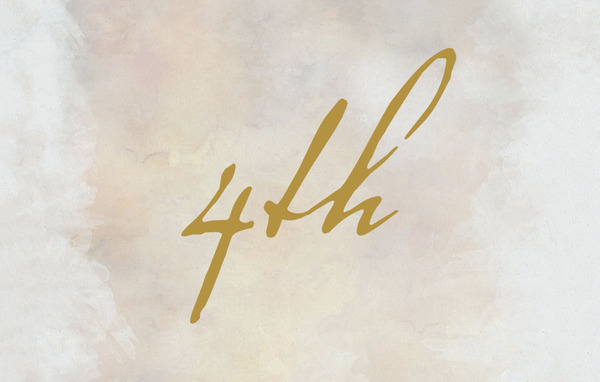 The University’s commitment to globalization is manifest in the percentage of students who study abroad. Among doctoral degree-granting universities, Notre Dame ranks fourth with an undergraduate student participation of 64.2 percent. Notre Dame International’s study abroad office manages over 50 semester-long programs in 26 countries.

Today’s robust study abroad programs were bolstered in the early 1980s by Isabel Charles, Notre Dame’s first female dean. Charles served as dean of the College of Arts and Letters from 1976 to 1982. She was then appointed assistant provost and director of international studies. She immediately set out to grow and expand the University’s international programs, traveling the world to visit existing study abroad locations and create new ones—in Ireland, Greece, Spain, China, Israel, and Australia, among others. 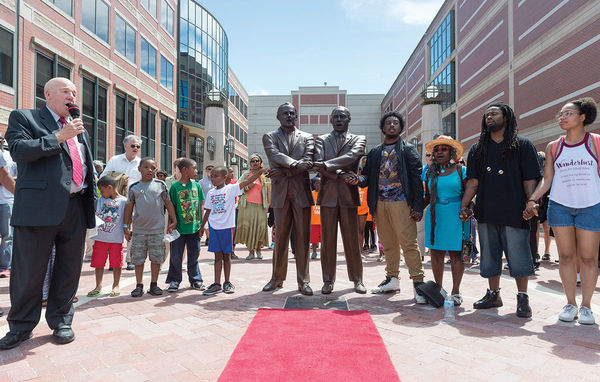 A larger-than-life-size sculpture of the late Notre Dame President Emeritus Rev. Theodore M. Hesburgh, C.S.C., and Martin Luther King Jr. linking hands in solidarity for racial justice was unveiled in downtown South Bend. It is based upon a photo of the two men at a civil rights rally in Chicago in 1964. In remarks on behalf of the Notre Dame community, Father Jenkins recounted the story of how Father Hesburgh, upon receiving a phone call the day of the rally beseeching him to attend, replied: “What time do you need me?” Father Jenkins concluded his speech by saying: “And when that phone call comes to us and it says, ‘We need you to work for justice, for peace,’ may we simply respond, ‘What time do you need me?’”

Father Hesburgh served as University president from 1952 to 1987. He moved Notre Dame into the fore on conversations of national importance on everything from higher education to the anti-war movement to civil rights. Father Hesburgh was appointed by President Eisenhower to the newly created Civil Rights Commission in 1957. The commission was intended to terminate the South’s filibuster, which was blocking civil rights legislation, especially that regarding voting rights, from passing and becoming law. 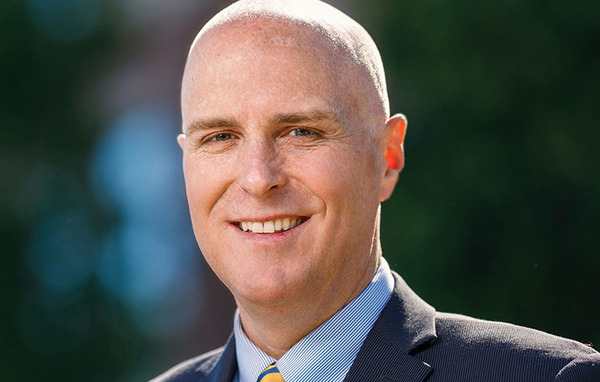 Bryan K. Ritchie was appointed to the newly created position of vice president and associate provost for innovation. He leads the University’s new IDEA Center, which provides technical services and expertise for idea development, technology translation, business formation, and commercialization. 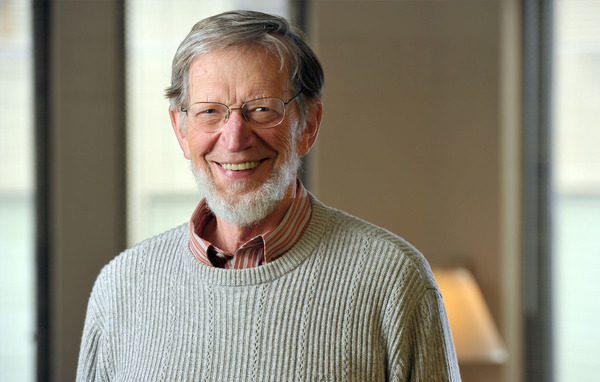 Alvin Plantinga, John A. O’Brien Professor of Philosophy Emeritus, was awarded the 2017 Templeton Prize. Over his 50 years of research in philosophy of religion, epistemology, and metaphysics, Plantinga has advanced landmark arguments for the existence of God, returning the questions of religious belief to the common discourse of academic philosophy. Previous recipients of the $1.4 million Templeton Prize include Mother Teresa, Aleksandr Solzhenitsyn, Charles Taylor, Jean Vanier, Archbishop Desmond Tutu, and the Dalai Lama.

The importance of philosophy at Notre Dame is rooted in Congregation of Holy Cross founder Blessed Basil Moreau’s belief that a student should be educated in mind, body, and spirit. Today the philosophy department is the largest in the United States. 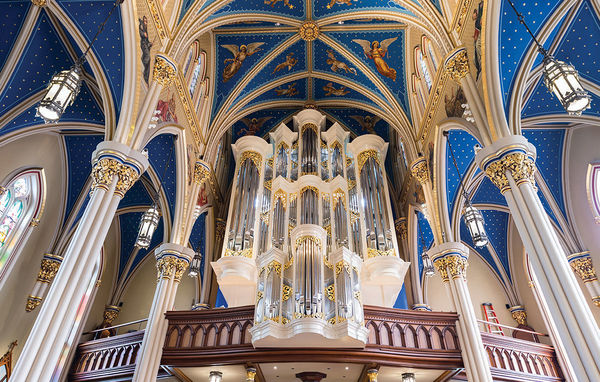 The fifth organ in the history of the Basilica of the Sacred Heart was dedicated in January. The Wayne and Diana Murdy Family Organ, constructed by Paul Fritts & Company Organ Builders in Tacoma, Washington, includes 70 stops and 5,164 pipes. The previous Holtkamp Organ, installed in 1978, was donated to Saint Pius X Catholic Church in nearby Granger.

The University’s original Sacred Heart Church received a small reed organ in the 1850s. In 1865, Rev. Edward F. Sorin, C.S.C., approved the replacement of the first instrument with a hand-pumped organ of 1,500 pipes. 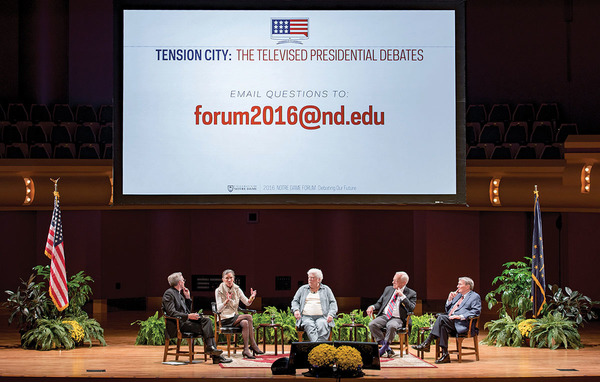 The Notre Dame Forum for 2016–17 examined the presidential campaign through the lens of debates over the years. It featured a panel in September composed of past debate moderators Jim Lehrer of PBS and Bob Schieffer of CBS, former League of Women Voters President Dorothy Ridings, and Janet Brown, executive director of the Commission on Presidential Debates. Other Forum events included debate watches and a mock student election leading up to the actual election in November.

Since its establishment in 2005 by Father Jenkins, the Notre Dame Forum has addressed timely topics from multiple perspectives. What began as a one-day event has since evolved into a year-long examination of a specific issue, with featured talks by leading authorities, classroom discussions, panels, workshops, symposia, and other events—all with the purpose of enlightening the campus community and elevating our dialogue. The first Forum explored the role of faith in a pluralistic society. 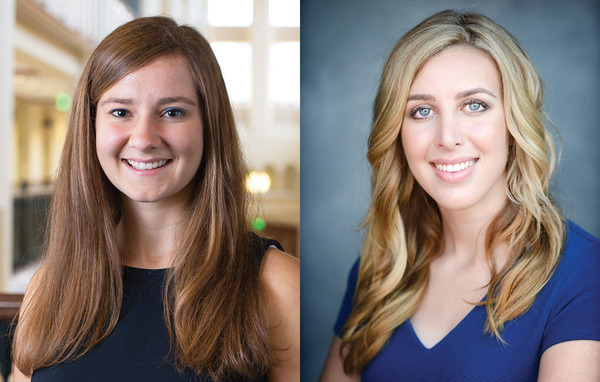 Two members of the Class of 2017, Christa Grace Watkins and Alexis Doyle, became the University’s 18th and 19th Rhodes Scholars. Watkins, from Blacksburg, Virginia, was a philosophy major with a minor in philosophy, politics, and economics. She also was selected as a 2016 Truman Scholar. Doyle is from Los Altos, California, and majored in biological sciences and international peace studies. She was part of the Hesburgh Program in Public Service, the Glynn Family Honors Program, and was a Hesburgh-Yusko Scholar.

The first Rhodes Scholar from Notre Dame was Robert D. Shea, a 1922 graduate. Shea held an A.B. degree from Notre Dame, where he was active in his senior year as assistant editor of the Juggler and the organizer of the school’s first golf tournament. 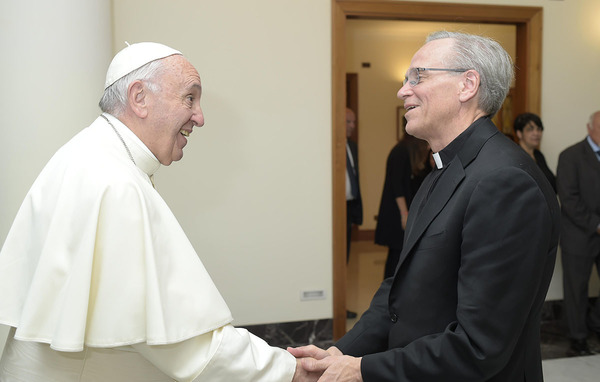 On a trip to Rome in June, Father Jenkins concelebrated Mass and met briefly with Pope Francis, followed by several meetings with key Vatican officials. In a conversation with Archbishop Paul Gallagher, Father Jenkins described the new Keough School for Global Affairs and the two discussed ways in which “Notre Dame can be of service to the Church in various parts of the world in which the University is present.” Father Jenkins also met with Cardinal Giuseppe Versaldi, prefect of the Congregation for Catholic Education; Bishop Brian Farrell, L.C., secretary of the Pontifical Council for Promoting Christian Unity; and Archbishop Jean-Louis Brugues, O.P., archivist and librarian of the Holy Roman Church.

The University has enjoyed a long and productive relationship with the Vatican. Fifty years ago, Pope Paul VI entrusted to Notre Dame president Father Hesburgh the establishment of an ecumenical institute in Jerusalem (Tantur). Due to the Arab-Israeli conflict, the institute did not open until 1972. Today, it welcomes scholars from all faiths to study and learn from the various faith traditions. More recently, Pope John Paul II designated the Basilica of the Sacred Heart a minor basilica. 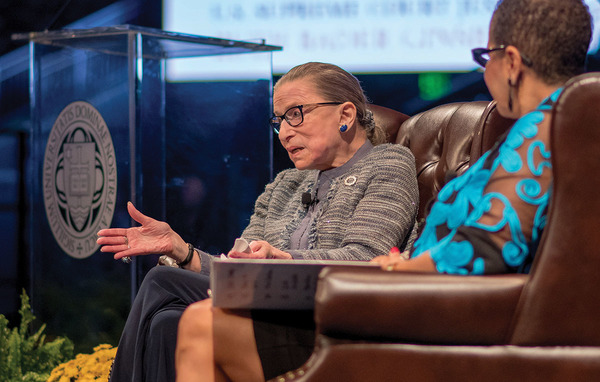 Purcell Pavilion at the Joyce Center was packed on the evening of September 12, 2016, when U.S. Supreme Court Justice Ruth Bader Ginsburg spoke on her life and career in a frank and often wryly humorous conversation with Judge Ann Claire Williams, a Notre Dame alumna and Trustee. She discussed the significant influence of her mother, her marriage to the late Marty Ginsburg, and today’s partisan politics. When the 84-year-old jurist was asked how much longer she will serve on the nation’s highest court, she said: “I used to say I planned on staying as long as Justice (Louis) Brandeis stayed … he was appointed when he was 60 … but he retired at 83, so I can’t use that one anymore. My current answer is as long as I can do it full steam, and that means I have to take it year by year.”